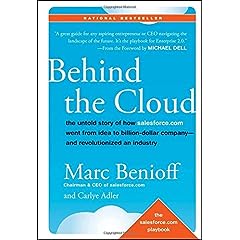 It’s the end of my second week at Salesforce.com, and I seem to have hit the ground running… A day of orientation, a couple of days working through the Force.com and Chatter developer tutorials, then head down on a guide to Getting Started with the Force.com REST API, published alongside the REST API Developer Preview Webinar last Tuesday (the webinar replay is online now).

The getting started guide featured a sample Java web app that acted as an OAuth 2.0 client, redirecting the user to login at Salesforce.com and obtaining an access token with which to interact with the Force.com REST API. Cool stuff, but there were a couple of questions on the webinar asking how to do the same thing from other languages. It took just a few hours to rework the sample web app, first in Ruby, then in PHP. I’ve also noticed a .NET implementation, by Dan Boris - cool stuff!

I’m commuting up the peninsula about three days a week on Caltrain, which is working out pretty well - there’s a station less than three miles from my house, and I can change to the Baby Bullet in San Jose, with the ride to San Francisco taking about an hour. I actually enjoy the time on the train - I just get my laptop and 3G card out and tap away - in fact, I’m on the train right now, somewhere near Palo Alto. :-)

So - two weeks in, I’ve published three pieces on *force.com, seen some very cool ISV demos at the second AppQuest judging round, and I’m off to Internet Identity Workshop XI tomorrow. If this sounds like your idea of fun, take a look at the Salesforce.com careers page. Lots of opportunities there, and, if you see something you like, don’t forget to tell them that sent you!

[…] from my role as community lead for OpenSSO some time ago, first to Huawei, then, a few months ago, to salesforce.com, blogging mostly at the Force.com blog. In that time, Forgerock have adopted OpenSSO, rechristening […]

[…] – I am a salesforce.com employee, so I’m definitely a little biased in favor of my Heroku cousins, but, I have to say, I […]