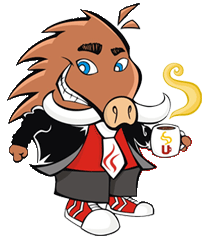 I just got confirmation that I’m on the bill at the Javali event next Tuesday, June 23, in Porto Alegre, Brazil. Javali, organized by SouJava and RSJUG, focuses on Java and free software, and is held immediately prior to FISL (on which more below). I’ll be doing quite a deep dive on the secure RESTful web services (via OAuth) work we have going on right now, which was first seen in public a few weeks ago at CommunityOne West and JavaOne. Javali will be at the Porto Alegre Serpro offices, Av. Augusto de Carvalho, 1133, from 09:00 to 20:00. I’m on at 18:30 in the Bill Joy Room, just before the pizza, assuming I make my 1 hour layover in Buenos Aires!

As I mentioned above, Javali precedes FISL, now in its 10th year, South America’s biggest open source conference with, according to the FISL home page, over 6000 attendees registered. I spoke at FISL 9.0 last April, and, I have to say, had a GREAT time. I saw an incredible display of energy and enthusiasm for all things open source, from kernel hacking to Ruby on Rails via every application of Java, although I think our evening expeditions in search of churrasco and caipirinhas probably also contributed to my positive recollections :-)

My session this year, ‘Open Source Identity Services with OpenSSO’, on Friday June 26 at 09:00 in room 40T, looks at the three different approaches we take to identity services in OpenSSO - insulating applications from identity via container plugins, support for standards such as SAML, and lightweight SOAP and REST for interacting directly with OpenSSO. I’ll be covering the secure RESTful web services demo again, but it will be a much higher level view than the Javali presentation.

So - probably not enough notice for anyone to book a trip to Brazil, but, if you’re going to be there anyway, drop in one one or both sessions and say “Hi”! And bring the cachaça! :-)

Slides from Javali and FISL 2009 « Superpatterns

[…] As I blogged the other day, I’m in Brazil this week, speaking at the Javali and FISL conferences in Porto Alegre. I’m all done with my sessions now, and, as promised, here are the slides: […]