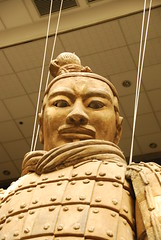 I’ve been in Xi’an, northern China, for the past few days, visiting Huawei‘s site here. Since my trip ran across the weekend, I found myself with a couple of days to explore the area.

Following Geoff’s lead, on Saturday morning, I headed out to bīngmǎ yǒng, better known in English as the Terracotta Warriors. I had the hotel, Days Xi’an, arrange a ride for me – the most expensive component of the trip at ￥380 (approx $60), but both car and driver were at my disposal for nearly six hours. After a two hour drive through the Xi’an traffic then a few miles of countryside, I arrived at the site to be greeted by an English-speaking guide named Jay, whose excellent service was an absolute bargain for ￥100 ($15). Admission was a very reasonable ￥90 ($13 or so).

Jay walked me round the initial display of a giant marionette warrior (pictured above), made for the 2008 Beijing Olympics, a pair of bronze chariots and other artifacts, then showed me to the 360 degree cinema for a 20 minute film introducing some of the historical background to the commissioning of the Terracotta Army by Qin Shi Huang, the first emperor of a unified China, and its accidental discovery in 1974 by a local farmer digging a well. Amazingly, although the location of the imperial tomb was well known, there had been no historical record of the army itself, so the find came as a complete surprise. 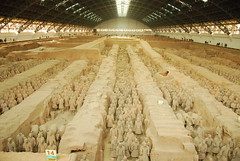 After the film, it was time for the main event – ‘Pit Number 1’ – and what an incredible sight it was – rank upon rank of larger than life warriors, vintage 210 BC. Pit 1 alone contains an estimated 8000 infantrymen, each an individual, with different faces, hair and physique. I spent some time walking around the perimeter, just taking it all in. At this point, what was most impressive was the sheer scale of the army – it was only when I saw a couple of the warriors up close in the adjoining display area that I realized the craftsmanship that went into each one. 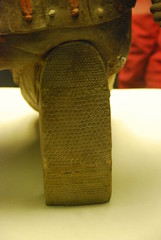 I took a series of pictures of the ‘Lucky Warrior’ – a kneeling archer – the sole statue found intact, all the others having suffered from the collapse of the wooden roof of the tomb. You can see all of the photos in my Flickr set from the day, but here is possibly the most interesting picture – the sole of the Lucky Warrior’s shoe – complete with three different tread patterns, for the heel, mid-section and front of the sole. When you see the craftsmanship that went into a single warrior, then realize that there are over 8,000 of them, it’s easy to believe that it took 700,000 workers some 40 years to complete!

The tour was rounded off by a visit to the official museum store, where I had an order from Jim for an ‘Old General’. I succumbed to temptation and came away with Jim’s general, an infantryman for myself, and a jade bracelet for my wife, Karen. Ah well; it’s only money, I suppose.

Saturday evening, I went out with Tom, one of the Xi’an engineers, and we discovered the Little Sheep Mongolian hot pot restaurant, where we had an excellent meal of thinly sliced lamb, cooked at the table in a spicy broth, washed down by a couple of bottles of Tsingtao. 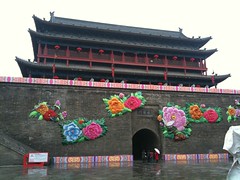 Sunday started wet, so I left my ‘real’ camera at the hotel and set off with only my iPhone to take pictures. A mistake as it turned out, as the day dried up soon after lunch – oh well – the iPhone did pretty well, in the event. First order of the morning was to find a source of China Mobile topup cards for my prepay phone, then I relaxed for a couple of hours at the Starbucks next to the hotel with a Chai tea and free wifi – bliss! After lunch I met up with Asen, another Huawei engineer based in Xi’an, and we headed out for a walk around central Xi’an.

Xi’an has the most complete city wall in China, with eight and a half miles of fortifications forming a rectangle around the city center. Right now, the wall is decorated for Yuánxiāojié, or the Lantern Festival, and we walked about a mile and a half along the southern section, photographing the decorations. Coming down off the walls, we happened on a market stall selling chops (name stamps) and I had a ‘monkey’ (my birth year) chop carved with my ‘Chinese name’ – 潘德生. Heading north, we came to the Bell Tower, pretty much the center point of the city. ￥40 ($6) bought a ticket that also included admission to the nearby Drum Tower.

The interior of the Bell Tower houses an exhibition of ancient Chinese pottery showing an amazing level of artistry, while the exterior gives an excellent view of the city including the four gates in the city walls. The Drum Tower contains exhibitions of antique furniture and, not surprisingly, drums. Again, you can walk around the outside of the tower, this time gaining a view of the Muslim Hui quarter of Xi’an. 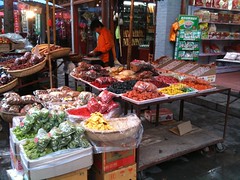 Leaving the Drum Tower, Asen and I entered the heart of the Muslim quarter, a bustling, colorful street market that seemed mainly focused on grilled beef and chicken kebabs, or chuànr. After a wander around, we chose a restaurant to sample some chuànr and pào mó, a tasty soup of cubed flatbread and beef, washed down with a little more Tsingtao.

I must admit, I didn’t expect Xi’an to have so much to offer. I knew of the Terracotta Warriors, of course, but I was still surprised at the modest grandeur of central Xi’an. If I’m lucky enough to return, I plan to spend a couple of hours circumnavigating the city walls, this time with my ‘proper’ camera 🙂